Msgr. Paul D. Theroux, a native of West Warwick, RI, was ordained to the priesthood in 1977. He served as Associate Pastor of Blessed Sacrament Parish in Providence until 1982 when he was assigned to the Diocesan Tribunal. In 1986, after completing studies in Canon Law, Msgr. Theroux, while continuing his work in the tribunal, was assigned to the college seminary where, in 1988, he was appointed rector and director of vocations. In 1992, Msgr. Theroux was asked to serve the National Conference of Catholic Bishops in Washington, D.C. as director of the Secretariat for Vocations and Priestly Formation. In 1995, he served as the national coordinator for the visit of Pope John Paul II to the United States. In 1997, Msgr. Theroux returned to Rhode Island to serve as Moderator of the Curia and Vicar General of the diocese until 2011 when he was appointed Pastor of St. Francis of Assisi Parish in Wakefield and served as the Dean of the South County Deanery until July, 2014, when Msgr. Theroux was appointed pastor of Holy Apostles Parish in Cranston. Additionally, Msgr. Theroux serves as a member of the diocesan Finance Council, Chairman of the Board of St. Joseph Health Services of R.I., and member of the board of the St. Clare Home in Newport. 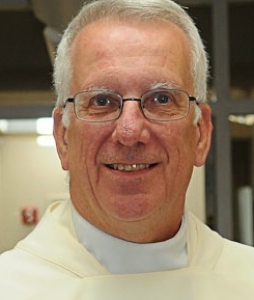